Are Tiny Restaurants the Next Big Thing?

You’ve heard of tiny houses – but what about tiny restaurants? 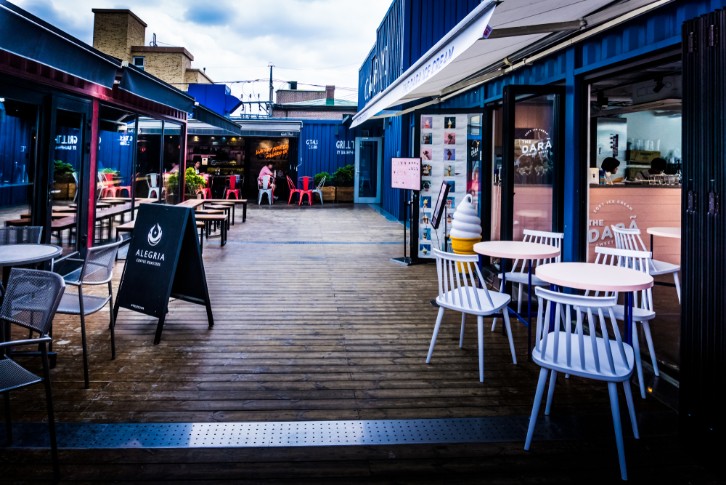 The idea of communal eating or social public spaces isn’t new by any means, but it is seeing a surge in popularity in recent years. (Photo: Derek Teo/Shutterstock.com)

One architect in California is going against the cliche that “bigger is better” and helping developers conceptualize creative social spaces designed to build community — and the local economy.

Stephen Francis Jones, principal and founder of SF Jones Architects in Marina del Rey, California, has been creating thoughtful and efficient design concepts for more than 30 years, with clients ranging from private homeowners and commercial developers to large corporations and even celebrity chefs like Wolfgang Puck.

NCR Silver talked to Jones to find out more about tiny restaurants and how the concept of “placemaking” is changing how businesses operate.

Many dining establishments are small out of necessity — after all, starting a restaurant is expensive. But Jones said the tiny-restaurant concept is more about intentionally creating diverse community spaces, rather than cutting costs.

“I like to compare it to the potluck lunch or dinner, where everyone brings their own little flavor,” he explained.

Jones said that tiny restaurants are basically “little foodservice engines” housed in a small freestanding building or repurposed shipping container. The units are similar to a food truck, but complete with a prep kitchen, walk-in cooler and other essentials. Several units typically share a communal seating area where guests can gather and mingle — sometimes including a shuffleboard court or lawn bowling for added entertainment.

“The restaurants feed off of each other,” he said. “It’s that diversity — diversity in food, diversity in activities, diversity in space, diversity in what’s interior and what’s exterior — that’s making these spaces attractive and making them desirable destinations. If you’re able to create an environment that is multifunctional, then it blurs the line between a food court and an activity place.”

The rise of ‘placemaking’

The idea of communal eating or social public spaces isn’t new by any means, but it is seeing a surge in popularity in recent years. Jones attributes this in part to the rise in telecommuting for workers and the sense of isolation it can create.

“It’s cool that I can be in my pajamas and have a conference call, but now I don’t have that social stimulation between my peers that I would get in a traditional work environment,” he said.

This phenomenon is why coffee shops and coworking spaces are so popular — and why the idea of “placemaking” is growing in importance among city and community developers.

According to the Project for Public Spaces, placemaking “capitalizes on a local community’s assets, inspiration and potential, and it results in the creation of quality public spaces that contribute to people’s health, happiness, and well-being.” What’s more, placemaking benefits the business community as well by supporting the local economy, attracting tourism and new business investments, creating cultural opportunities and reducing crime.

Jones said the idea of placemaking has always been at the heart of his work, and he finds joy in thinking outside of the box to imagine design concepts that unify people with others and the world around them. That’s why he’s keen on using tiny restaurants to give new life to community spaces.

“Let’s say a sleepy town is trying to boost their downtown area. They’re trying to create more of a destination to their space,” he said. “As an architect or developer, we could partner with the city to come up with a concept that benefits both parties. If the city owns a piece of property, they could lease that property out to the developer. The city then becomes partners with the developer, and the developer builds out the tiny restaurants, which are leased out by restaurateurs and other small business owners.”

While food obviously is a big draw for these community areas, Jones also envisions expanding the concept to include pop-up retail, demo spaces and entertainment options to add more variety for visitors.

“There’s a need for more flexible spaces, and I see that as being one of the components of the concept,” he said. “It’s not necessarily that everybody’s on their own trying to make it, but working as a collaborative with different varieties of activities, different flavors of food, different spaces that change from one to another.”

Because the tiny restaurant concept is focused on diversity and flexibility, Jones believes it can be a great way for new restaurateurs to break into the business.

Similar to how some launch a food truck before making the leap to a brick-and-mortar location, moving into a tiny restaurant space would require less of an upfront investment on the part of the restaurant owner. The major upfront buildout costs would instead fall to the developer, so the point of entry would be much more feasible for a startup or an established restaurateur wanting to test out a new market.

“At one space we’re doing right now in Concord, we have this guy who has only ever operated a food truck. He doesn’t even know how to go about building a restaurant, but he knows how to run his truck and is really successful. So my client, the developer, identifies these good food concepts with the right type of person who will contribute to the community.”

For restaurateurs interested in this approach, Jones advised finding a good broker who can let you know about upcoming opportunities in your area, such as commercial developers, city planners and architects.

“There are a lot of really creative brokers and developers out there that are looking for these type of restaurateurs and entrepreneurs that would be an asset to their development. So try to find people who are making it happen that you can partner with, rather than just trying to find the right spot.”