From knowing when to keep quiet to putting people first, here’s some thoughtful advice from the world’s most famous genius. 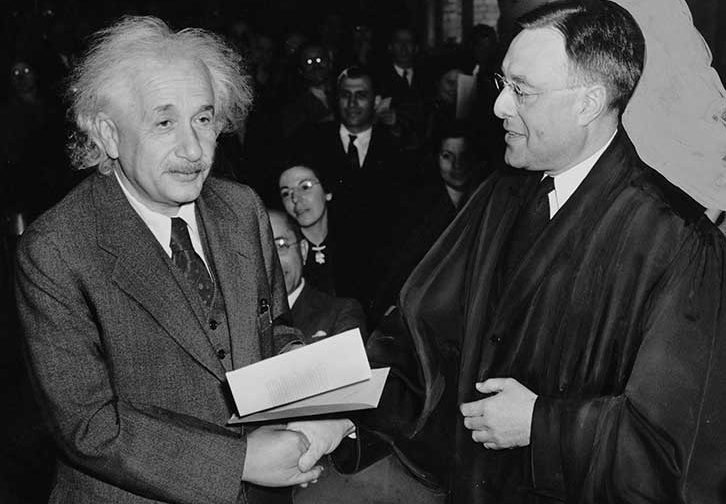 Albert Einstein quotes inspire anyone from scientists to small business owners. Here are five of some of his best. (Photo: World-Telegram photo)

Albert Einstein was smart about a lot of things, including relativity, black holes and time travel. But his wisdom was not limited to physics. His pearls of advice, often laced with his inimitable sense of humor, have served as inspiration to people in all lines of work.

“Einstein continues and no doubt will forever continue to fascinate both scientists and other admirers around the world,” wrote Alice Calaprice in the introduction to “The Ultimate Quotable Einstein.” Over the course of 500 pages, Calaprice, the world’s leading expert on Einstein quotes, discusses and dissects the many famous (and some infamous) quotes from one of the smartest men of the last century.

Here are five of the best, and what small business owners can take from them.

Leading a team often means being able to inspire them with great oratory. But as Einstein implied, it’s also about knowing when to keep quiet. Staying silent — whether it’s to listen to an employee’s idea or simply to keep yourself from saying something stupid — can be golden.

Elliot Berlin, DC, who operates wellness centers in Southern California with about a dozen employees, said he’s a fan of this Einstein theory. “Many entrepreneurs focus on the ABCs of running a successful business, but I believe the secret to success is Einstein’s XYZs. Especially in the Z.”

“Only a life lived for others is a life worthwhile.”

This gem should probably be on the cover of your customer service manual, printed on T-shirts and handed out to all of your employees. The relevance: Customers come first. And sometimes, normal business practices need to be pushed aside to help a customer in need.

Take for example the 89-year-old Pennsylvania man who was snowed in and had no way of getting to any of the nearby grocery stores. He called each one, asking if they would deliver. Each told them it was not their policy. Then he dialed Trader Joe’s. That store also informed him they don’t deliver — normally. Then they made an exception, delivering a carload of food 30 minutes later. They even suggested other grocery items for him based on his low-sodium diet and brought them along.

“If there is no price to be paid, it is also not of value.”

“You have to be willing to spend money to make money,” Berlin said. “Cutting corners may seem like a good idea up front, but the money you save can often cost you double on the back end.” If you sell an inferior product, your customers will complain and word will soon get out.

Berlin said he found this Einstein adage to be especially true when hiring employees. Scrimping on salary, if it means not hiring the best candidate, can end up costing you more in the long run.

“I firmly believe that the love [of a subject or hobby] is a better teacher than a sense of duty — at least for me.”

Whether you run a coffee shop or a daycare, you have to love what you do in order to shine (and to put in the long hours it takes to succeed).

Another modern-day genius echoed this sentiment. During Steve Jobs’ now-legendary commencement address at Stanford University in 2005, he advised the graduating class on the secret to success.

“Enjoying the joys of others and suffering with them — these are the best guides for men.”

Your employees are your most valuable assets. Being a good boss means being a good listener.

Touch base with each employee regularly, not just about work but to see how they’re doing. Ask about the recent accomplishments of their children or the health of a sick pet. Show interest in what’s important to them. Investing this small amount of time will reward you with better working relationships and earn you greater respect.

Berlin said, “Investing adequate time and money into employees motivates them to bring their ‘A game’ to our clients, and everyone goes home happy.”