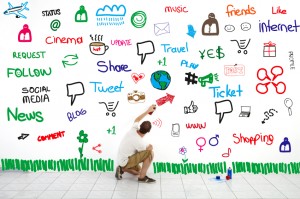 The evolution of technology over the past decade has affected the retail sector tremendously. Brick-and-mortar stores have had to quickly adapt to the massive growth of online commerce, and many of those that weren’t agile enough were left by the wayside—or disappeared entirely.

Today, one of the technology platforms that is impacting retail most significantly is social media. Giving retailers the ability to deliver incentives, discounts, and custom content, social media offers a rich, direct channel for marketing to customers. How social is your store?

What savvy retailers need to know this month

[3] (Why Everyone is Talking About Ecommerce Inbound Marketing: How Word-of-Mouth, Customer Reviews are Changing the Marketing World, Hubspot 2012)
http://blog.hubspot.com/blog/tabid/6307/bid/30239/71-More-Likely-to-Purchase-Based-on-Social-Media-Referrals-Infographic.aspx