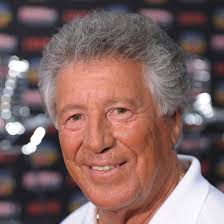 At NCR Synergy 2015 you will have the rare opportunity to sit down and listen to Mario Andretti talk about the thrill of getting behind the wheel, his family's incredible racing lineage, and how by adapting to change you can get in front and stay in front. His unbelievable career as a race car driver makes him a credible expert on setting and obtaining goals and striving for excellence, which is of course what NCR is all about.

Mario Andretti will be closing the event on Wednesday June 24 and will also guest-host a special invitation-only VIP lunch, and meet & greet after the session.

NCR Synergy 2015 is NCR’s prestigious annual user conference for NCR customers from the retail industry and wholesale distribution. Join us June 22-25 in Orlando, Florida and you will gain unique insights and perspectives on the trends shaping the industry and how you do business. Andretti joins Tom Koulopoulos, and a host of other retail leaders and innovators, who will be speaking and sharing information at the conference.

Mario Andretti is considered by many to be the greatest race car driver of all time. He won the Indianapolis 500, the Daytona 500, the Formula One World Championship and the Pikes Peak Hill Climb. He won the Indy Car National Championship four times and was a three-time winner at Sebring. He won races in sports cars, sprint cars and stock cars – on ovals, road courses, drag strips, on dirt and on pavement. He won at virtually every level of motorsports since he arrived in America from his native Italy at age 15.

Andretti took the checkered flag 111 times during his career – a career that stretched five decades. And he was competitive all of those years: He was named Driver of the Year in three different decades (the 60s, 70s, 80s), Driver of the Quarter Century (in the 90s) and the Associated Press named him Driver of the Century in January, 2000.

The admiration for Andretti has been for his achievements on the race track. He is in the very elite, top-superstar category of his game. Yet, if you look at his whole life, he has seen the world that most people will never see and it’s an incredible and interesting journey. Mario retired from active driving in 1994 and is now a successful businessman off the track, with a winery, a petroleum business and other interests.

To learn more about the event visit the Synergy 2015 website.