Why would they spend more, when money is tight? 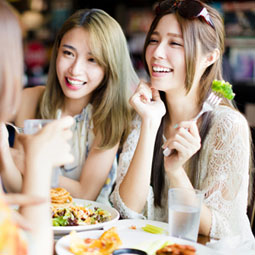 While conducting ethnographic research on blue-collar migrant workers and their remittance activities in Singapore, we discovered just how important the consumer experience really is. Every year, billions of dollars are sent to home countries. These cross-border money transfers are called remittances. Worldwide, about US$600 billion is sent home by foreign workers, many of whom are lowly paid.

Amongst other things, we wanted to know where and how they carried out remittance activities and why they chose that particular place, service or channel. One of our initial hypotheses was that people would choose MTO’s (Money Transfer Offices) close by, so they could save precious time and money. However, our research, our field data did not support this hypothesis. They travel to MTO’s much further away. Some migrant workers actually had MTO’s located a ten-minute walk from their accommodation, but chose to travel to places about 40 minutes using public transport. It was counterintuitive, especially when many of these foreign workers had very limited time off and are generally cost-sensitive.

From interviews and shadowing of participants, we discovered why they would pay extra to travel and endure long waiting times in queues. It is all about the experience and not merely the transaction. For migrant workers, carrying out their remittance activities was more than just dollars and cents. It was a social and cultural event. Often dressed in their “Sunday best,” they travelled to MTO’s usually located in shopping areas where they met and caught up with their friends or made new ones with fellow country people. Many of these places also have dedicated shops, selling food and other items from their home countries with signs, written in their language. In many respects, it was a home away from home. And after a long week of working, it felt nice to meet friends, speak the mother tongue and enjoy some semblance of home comforts in a foreign country. For example, in Singapore, there’s an area popularly known as Little Myanmar (Burma). On any given weekend, the main mall is packed with workers from Myanmar, forming long lines to buy betel nuts, having a haircut at one of the Burmese barber shops or at one of the Burmese grocery. When we found an MTO, the service staff could barely speak English, which is unusual in Singapore. From staff who would speak the same language and eating home country delights to commemorating national festivities with fellow countrymen, these places offer the lure of cultural convenience. 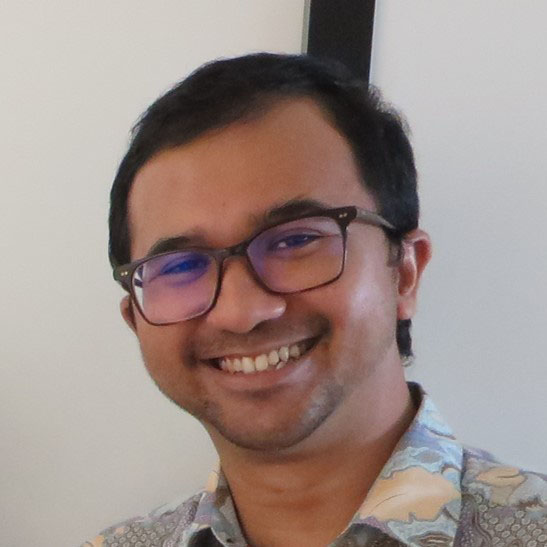 Shamil has a strong research background grounded in Sociology and specializes in creating ethnographies and using social media monitoring tools. Shamil wants to use this knowledge to inform the conceptualization and application of the omni-channel experience. 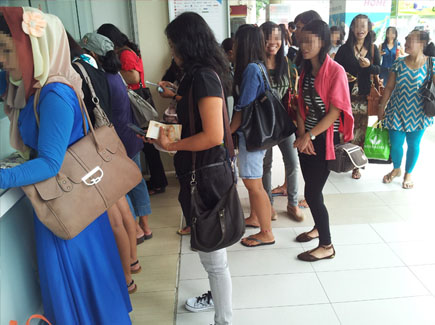 Indonesian foreign workers socializing as wait their turn at a MTO. 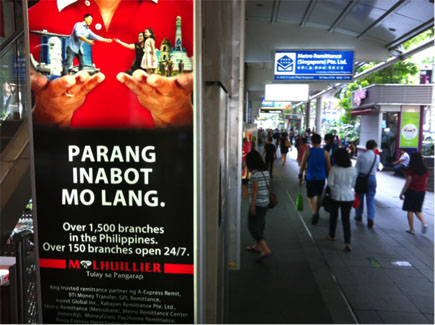 MTO ads at Lucky Plaza, in Orchard Road, Singapore. The two signs (Red in the foreground and blue in the background) are on remittance and messages in Tagalog. This suggests three things. First, that they cater to Filipinos. Second, this place seems to be a main remittance venue, and thirdly, how tight the competition is between the remittance service providers.

This investigation of consumer behavior demonstrated how strong familiarity, notions of identity and nationality, and social networks are in drawing customers to a particular location, only part of which was the central money transfer activity. Remittance providers ought to consider these elements when choosing locations and designing services. This simple example, one of several findings from a larger study, illustrated that the experiential factors can easily outweigh the obvious or intuitive ones, and the value and importance of understanding one’s customers.