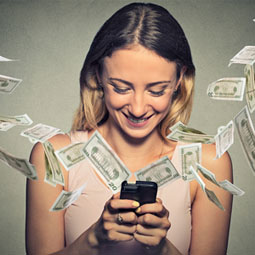 Banks play a big part in influencing and shaping consumer trends in the financial services industry, but it's also important for financial institutions (FIs) to be in tune with what people want and to respond accordingly.

Whilst there are ongoing changes in the choices consumers have in digital payments space such as with Apple Pay or contactless, it should be remembered that a large proportion of consumers still want to use cash and rely heavily on ATMs. More importantly, consumers want to have a choice as to how they pay for goods or services and not be forced into one specific channel in what is becoming a fragmented payments landscape.

those customers who prefer tried-and-tested ways of managing their money.

Is there really a change in cash use?
It is often argued that physical currency is not as common or as necessary as it once was, in large part because

modern-day consumers have so many other ways of paying for things - mobile wallets and contactless cards, for

markets like the UK, France, the Czech Republic and Poland. It also referred to an initiative by the central bank of

Thailand to reduce cash use. The same report makes clear though that ATM cash withdrawals remain strong, with

the equivalent of over $420,000 USD withdrawn from the world’s 3.1 Million ATMs every single second. A number

that is expected to increase to past 4 Million by 2021.

Moneris, a credit and debit card processor, predicted that cash purchases will account for only ten percent of

money spent in Canada by 2030, down from 35 percent in 2014. The company said this decline will coincide with

research by Cardtronics who surveyed over 1000 US consumers in their Health of Cash study. It concluded: “A

healthy payments community is diverse, not cashless, and it should always be defined by consumers having the

freedom to choose convenience, security and privacy based on their preferences. It found that with local retailers,

consumers surveyed always like to keep cash on hand

Such surveys and trends are published almost daily now, but they don't diminish the fact that cash actually

which has specially designed tactile features for blind people, is a perfect example of how cash can offer

advantages that other payment methods can't. The Bank of England’s new polymer £5 note has also had

significant amounts of media attention after its recent launch.

It's also important to recognize that a cashless society could come with problems of its own. In an article for

Bloomberg, Elaine Ou, blockchain engineer at Global Financial Access and a former lecturer at the University of

Sydney, said one of the most important aspects of physical money is the fact that it has a current and immediate

value - hence the name currency. An account balance, on the other hand, is "not actually money, but a claim on

violates the basic laws under which currency has operated since before the Industrial Revolution".

What does all this mean for ATM technology?
It's clear that cash, isn't going to disappear anytime soon, so the ATM will continue to play an extremely important

role in how banks interact with consumers and deliver services. One of the key goals for FIs in managing and

planning investment in this channel should be to engage with people to find out what they want, rather than

basing decisions on wider trends that may have little relevance to your loyal customers. Dedicated cash supply

Furthermore, it's important to acknowledge that modern ATMs do more than simply dispense cash. They can be a

flexible and multifaceted element of your omnichannel offering, facilitating deposits, enhanced security, and self-

service capabilities that are equally beneficial for your business and your customers.

The Reserve Bank of India has recently launched a drive to effectively repurpose ATMs as bank branches, showing

just how valuable this channel can be to help the underbanked. The ATM is often the first point of contact

consumers have with their bank. In summary, not only are ATMs and cash here to stay for the foreseeable future,

inclusion in the years to come.