Who uses the branch? 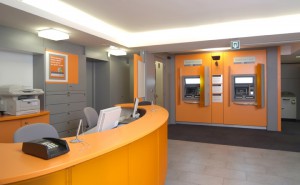 For all the new digital services being launched by banks, the branch is still very much alive and well. But younger customers who have grown up surrounded by a new wave of technology have long been thought less interested in physical banking than the virtual world. So who actually uses the branch?

A study conducted last year in the UK by Vouchercloud.com found that a sixth of respondents 18 to 30 years old had never visited their bank, and nearly half did not know where to find their local branch. That was probably because 57 percent said online banking was the channel they used most often, while a third said the same of banking by phone.

Modern life is so busy that the appeal of online and phone banking, which can be done outside of working hours and at the customer’s convenience, is easy to see. For some younger customers, physical branches barely seem necessary.

In fact, a report from Accenture found that 18 to 34 year-old consumers would be more than willing to switch to entirely virtual banks from some providers. The data showed that digital payments networks would be the first choice–half said they would bank with Square if it offered the service, while 41 percent said the same of PayPal. Interestingly, Apple, Google and Costco attracted 29 percent of respondents each.

But that still means that a substantial proportion of respondents weren’t interested at all and many expected there would at least be some offline interaction. Just 22 percent of 18 to 24 year-olds and 33 percent of 25 to 34 year-olds in the UK, for example, said they would consider using a bank that had no branches or call centers.

A recent report from Bankrate.com found that even though younger people were far less likely to visit banks or credit unions than older peers, a fifth had visited their branch in the past week and a higher proportion had visited within the past 28 days. Yet at the same time, one in five retirees hadn’t visited a branch in more than a year. It isn’t just young adults who are making the most of alternatives.

The Branch “experience” counts. A recent US survey found that online banking is popular, but Americans still like going to a branch. KPMG and Ernst & Young’s 2014 surveys show that over 50% of customers still make product purchases and seek advice in the branch. However, it's not the bricks and mortar that is the attraction–it’s the expert advice that matters. The same surveys tell us that 55% of customers will buy & invest more when their bank advises them on how to meet their financial goals. Generation Y may well be tech savvy, however they haven’t become financial experts overnight, and as they encounter complex life events, the need for that advice increases.

It isn’t a simple case of using virtual banking services instead of visiting the branch. In many cases it’s actually a choice to use a wider range of services. It turns out that the branch has its place for every age group.