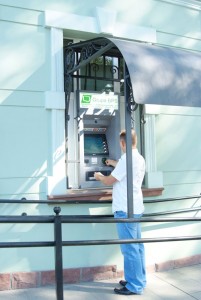 For some consumers, the idea of paying to withdraw their own money at the ATM is something they try to avoid.  For others however, paying a small fee for a convenient cash withdrawal is perfectly acceptable.  In places like the UK most consumers generally expect to find a free-to-use cash machine pretty easily.

In Scotland recently, the need to assist consumers looking to undertake a free cash withdrawal seems to run particularly strongly.  This was shown recently by a picture doing the social media rounds showing a Glasgow ATM daubed with black marker pen instructing people where the neatest free cash machine is.

A hand drawn map tells consumers that the nearest free cash machine is at Tesco (5 mins) or the Londis Garage on Elmbank Street (2 mins). While this is an undesirable approach to assisting consumers find an ATM, it highlights the balance that ATM deployers are trying to strike between charging for ATMs and offering them to use free of charge.

Independent ATM deployers have successfully operated established outsourced business models for over 20 years in over 40 countries and there are now over 460,000 independent ATMs around the globe. This accounts for around 16% of all ATMs globally.

To give some background, surcharging works where consumers are prepared to pay for the convenience. The average surcharge fee globally is around $2.25 and for deployers this model can be profitable even with low transaction volumes. In some countries card issuers may have certain rules around the number of free transactions made anyway, so often there is little incentive for consumers to sniff out the free-to-use ATM.

In the UK overall, cash withdrawals and consumers' trust in cash remains strong. Some 7.77 million cash withdrawals totaling £581 million are made at ATMs each day - equivalent to around £359,589 being withdrawn from UK ATMs every minute.

Some UK ATMs have been in use for 15 years handling in some cases up to 20k cash withdrawals a month. Such ATMs will likely be replaced very soon by banks and independent deployers for newer ATMs, such as those in the newer NCR SelfServ range.  These feature much more modern design and aesthetics, with a focus on enhancing the consumer experience and lowering costs to banks and independent ATM deployers.

In this example, the concept of paying to withdraw cash may not be to every consumer's choosing – however it remains extremely popular in the UK in locations such as retail stores, pubs, fuel stations and other high footfall locations, where consumers are more than comfortable with paying a premium for ‘convenience.’  With ATMs now offering the ability to undertake a diverse range of transactions such as using maps and location services, consumers most definitely won’t need assistance quite like the hand drawn map on that Glasgow ATM in the future.