What will the next 5 years bring for ATMs? 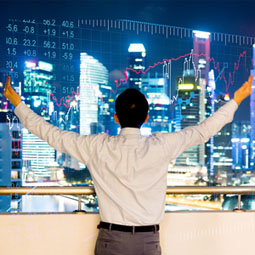 Anticipating what the future will bring is a big challenge for all businesses, particularly those operating in dynamic, rapidly evolving industries like financial services technology. If you manage to get it right, you will be in an excellent position to prepare your company - and your customers - for what's around the corner.

With the consumer experience and self-service becoming more important, many retail banks will be looking at potential future developments in one of the most important customer-facing channels - the ATM. All the signs point to exciting growth and innovation in this area over the coming years.

4m ATMs by 2021
Having risen by five percent to 3.2 million at the end of 2015, the number of ATMs installed worldwide is predicted to continue growing to four million by 2021, according to the latest forecasts from specialist intelligence and consulting firm Retail Banking Research (RBR). This is according to the views of not only ATM deployers but also retail banks globally also.

Recent developments in Asia - such as the repurposing of ATMs in India to effectively serve as branches in underbanked areas - has underlined the importance of this channel for boosting financial inclusion. This region is set to make a massive contribution to growth in ATM deployment over the coming years, driven by China and India. RBR predicts that the Asia-Pacific market will expand by 46 percent by 2021, accounting for well over half of the global total of installed ATMs.

Study leader Rowan Berridge said: "China and India have seen enormous growth in ATM numbers over the last few years and RBR forecasts this will continue as authorities in these markets are determined to use ATM deployment to spread access to financial services as far and as wide as possible."

The Middle East and Africa are expected to see similar growth in deployment, but with significantly lower numbers of ATMs. Average growth in other regions is likely to be much lower, averaging seven percent or less. North America is set to remain the second-largest region in terms of overall ATM numbers, but will be only one-fifth the size of the Asia-Pacific market by 2021.

Innovation on the tech front
With such rapid progress occurring in many other sectors and consumer-facing products, banks do to some extent run the risk of appearing stagnant and potentially outdated from a customer experience perspective if they fail to modernize and innovate in the ATM channel.

There are many technologies that could have a huge impact on ATMs over the coming years, such as contactless accessibility. Barclays recently announced that it was rolling out a contactless mobile cash service in the UK, allowing customers to make a withdrawal with a tap of their smartphone or debit card. This was something that ANZ in Australia deployed in 2015 by offering tap and pin functionality to consumers. The result? More secure, reliable and convenient access to cash, with transactions times in some instances reducing by up to 50%.

Biometrics is another field that offers plenty of promise for the ATM channel, opening up potential benefits including stronger security and increased convenience for the customer. India's DCB Bank is set to enable biometric authentication via the Aadhaar ID system for cardless ATM transactions, while in the UAE, ADIB has rolled out voice-activated ATMs for visually impaired users.

In the coming years, banks will have more and more data to handle and new security threats to contend with. Cutting-edge security solutions incorporating behavioral, predictive and cognitive analytics are likely to prove increasingly valuable when it comes to understanding and forecasting certain patterns, on the part of customers as well as machines. This will put you in a stronger position to identify anomalies and threats.

In an article for Banking Technology, Paul Simmons, director of technical support services at IBM, said the "data deluge" that financial institutions face in our digital era is "not something to fear".

"It is an opportunity for banks and traditional ATM vendors to grasp and make the most of," he stressed. "With the new technology capabilities provided by the likes of cognitive computing, and advances to areas such as analytics, the future is bright for those behind one of the high street and banking's most recognizable fixtures."

In summary
Changes in financial services technology and retail banking globally is likely to continue at pace in the coming 5 years as modernization and replacement of ageing ATM estates continue. Financial institutions will also likely look to make changes in the areas of self-service, branch transformation, digital banking and other channel management as the demands of consumers continues to increase.