Is wearable banking the next big thing? 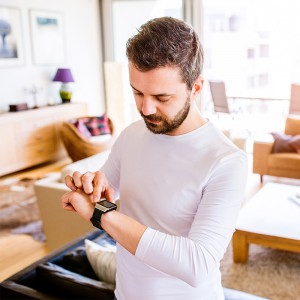 Wearables come in all shapes and sizes, and they are now among the hottest fashion accessories for today’s increasingly tech-savvy consumer. Whether it’s connected watches, smart jewelry, activity trackers or digital clothing, there are numerous gadgets that can help deliver innovative functionality on the move.

Recent statistics from the International Data Corporation (IDC) showed the global wearables market grew more than 67 percent in the first quarter of 2016 when compared with the same three-month period last year. The company said the technology has improved significantly in recent years and is experiencing a notable rise in popularity.

Banking is one sector that could soon begin to feel the impact of new wearable technologies, particularly among younger customers.

The rise of wearable banking
Last year, Juniper Research predicted the number of banking apps that people would access through their smartwatches would surpass 100 million by 2020.

“Digital banking has experienced a substantial progression towards personalized computing,” said research author at Juniper, Nitin Bhas. “We do believe that, keeping pace with technology evolution, wearable banking will witness a faster adoption rate than mobile banking, especially among millennials.”

It’s a big claim, but one that financial institutions (FIs) appear to agree with. Digital Insight, an NCR company, is already helping organizations develop their smartwatch banking offering, and we expect plenty more FIs will require similar assistance in the future.

But are organizations delivering the right services to take advantage of Generation Y’s keen interest in wearables?

Putting together the millennial puzzle
The Millennial Disruption Index has already revealed that FIs are struggling to gain market share among those born between the early 1980s and early 2000s. A staggering 71 percent said they would rather visit the dentist than listen to their bank!

Meanwhile, 53 percent feel their financial services provider isn’t offering anything different to competitors, resulting in one-third claiming they would consider switching banks over the next 90 days.

However, PwC found that millennials are confident of the potential of wearables. More than half (53 percent) claimed they are excited about the future of the technology, whereas just 41 percent of the general population said the same.

As banks continue to develop their omni-channel strategies, could wearable-enabled transaction services offer the key to attracting and retaining a new wave of millennial customers?

Wearables are certainly an area that many FIs will be keeping a keen eye on over the coming years, and we’re keen to see how the space continues to develop.