The financial technology industry would be unwise to ignore the rise of mobile transaction services, person-to-person networks and the whole range of digital disruption in the payments arena from the likes of Bitcoin, ApplePay and PayPal that undoubtedly is putting pressure on cash. 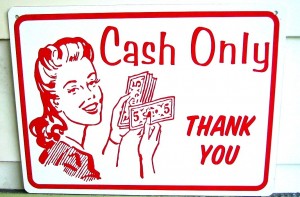 Nevertheless, cash use doesn’t seem to be waning all that much, with around 85% of global payments still made using cash. One of the main reasons is that there is nothing to truly compete with the flexibility of notes and coins.

In fact, recent statistics from ATM Marketplace highlight that one-third (34 percent) of US consumers are actually making more cash purchases because of data breaches. Cash is a hard habit to kick - here are three most common uses.

Prepaid cards and mobile money transfers may be on the rise, but cash is always going to be used for gift-giving. Everyone has received some cash in an envelope, whether at Christmas or on a birthday. In China, millions of little red envelopes with cash are dished out every New Year.

Cash in a card may not be the most exciting gift, but it may be exactly what people want as it instills a real tangible sense of giving and receiving.

And there is an added bonus to this type of gift as it can help teach young people about money, saving and philanthropy.

Whether you’re in a restaurant, a cab or paying the pizza delivery guy, it’s hard to imagine tipping without physical cash. While it’s relatively easy to leave money on a card, it’s a lot more convenient to leave a couple of dollars in cash. Plus, service charges and anything added to a card payment does not have to be passed on to the employee - so cash is the only way to make certain the person who served you gets the tip.

It’s hard to imagine giving to charity without cash at least being an option, and new figures show consumers rely on their pennies for donating to good causes.

In Britain two-thirds of people used cash to donate in the past 12 months, despite the increasing availability of other forms of payment options. In contrast, the Halifax Giving Monitor review showed only one in ten charity donors gave by text (nine percent) or online (13 percent).

These three examples make it clear why cash use will continue to remain strong, even without considering some other popular uses for high volume small value transactions in cash such as: paying for lunch or dinner, selling of goods privately, using cash in leisure pursuits for example in the casino or for transportation expenses.

Money makes the world go round. If cash really is going...

Much is said about the decline of cash use globally. ‘Cash...