Just three years ago, Myanmar in South East Asia did not have a single ATM or even a retail point of sale terminal to process a credit or debit card transaction. Now there are over 1,000 cash machines in the country, which is fast becoming a major growth market as its economy is opened up to foreign investment.  The ATM install base in the country increased by over 50% between 2013 and 2014 (Retail Banking Research – Global ATM Market and Forecasts to 2020). 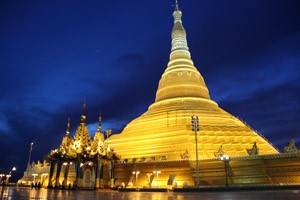 In Myanmar, it's not uncommon for bank customers to make deposits with literally sack loads of notes, as everyone still pays for even large ticket items like a house or car with cash.

The country’s central bank is now beginning to look to modernize the banking sector to drive greater competition and innovation.  This is likely to spur further modernization of an economy that has been almost 100 percent cash-driven.

Foreign banks also have a part to play in this country’s development and ANZ launched its first branch in Yangon in October. This is potentially good news for the country’s consumers looking for fast, convenient and secure access to cash - as NCR recently helped launch the world’s first tap and pin ATM with ANZ using SelfServ 23 and contactless technology.

Contactless ATMs may be a little way off for Myanmar, as firstly consumers need to adjust to using more basic ATMs. Despite this, there is clearly huge opportunity in Myanmar for ATM growth - cash demand is exceptionally high and the ATM install base is low.  What is worth noting is that a challenge is that consumer’s unfamiliarity with cash machines or debit cards might make this task trickier than at first sight.

Matt Davies, the International Monetary Fund’s mission chief to Myanmar, explained to Bloomberg: “It takes time for practices to change. Myanmar remains a cash economy and will continue to be a cash economy for some time.”

Nevertheless, the availability of advanced ATM technology combined with omni-channel delivery should create demand for a far wider range of financial services than people have been used to.

The ATM may be a key bridge between the cash economy of today and the omni-channel world of developed markets.
For example, mobile-ATM integration could be a key factor in Myanmar’s progression from being cash-only to a more mixed banking setup.

An Economist report noted how The Consultative Group to Assist the Poor, a group based at the World Bank that campaigns for financial inclusion, says "mobile banking has the potential to help Myanmar provide basic formal accounts and payment services to most of its citizens." Consumers in Myanmar could effectively bypass conventional banking and move straight to mobile services that would enable them to access cash at the ATM.

Another opportunity for the banking industry in Myanmar is with cash recycling, as the vast volume of banknotes that are in circulation would more than justify investment on this side.

ATMs are also important from a wider financial inclusion perspective. Rather than just a cash dispenser, modern ATMs enable consumers to pay bills, deposit cash and checks, or even purchase shares. For thousands of remote towns and villages unlikely to ever see a branch open, this could enable access to basic bank accounts that wasn’t possible in the past.

In Mynamar, there is still a long way to go, of course. According to the latest World Bank figures from 2013, there were just 0.57 ATMs per 100,000 inhabitants, making it the least densely served nation on the planet, below Afghanistan at the time. The good news is this is changing fast and thanks to a more open economy, a willingness to adapt by the regulators and ATM technology that will meet the needs of a modern Myanmar, this trend is likely to continue.

Find happiness in the journey…and destination