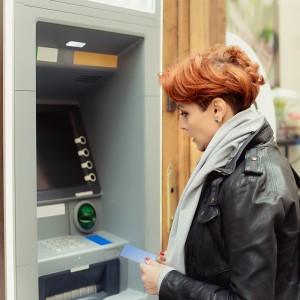 Over the last few years, there have been a huge number of innovations to make the ATM more functional and offer a much wider range of services. Yet, the actual process of using the devices has remained largely unchanged - users have to insert their card and confirm their identity with their PIN before they can use the available services.
But in the shifting digital environment, is this always the best solution? Accessing funds if someone has lost their card remains a hassle, while a growing number of consumers are looking to reduce their overall use of payment cards in favor of alternative solutions.

Mobile payment technologies such as Apple Pay, for instance, are growing in popularity as more customers become familiar with paying for goods and services via their smartphone. For many people, this may be more convenient than carrying around a payment card as well, so it makes sense to offer similar solutions at the ATM.  Changing the way consumers interact with the ATM is not as big a shift in behaviour as many financial institutions may think.  Consumers already use touch screens and contactless one tap transactions in many other industries such as retail, travel and leisure.

The rise of cardless ATM capabilities

Several large banks have begun rolling out such systems in the US. Bank of America, for instance, has outlined plans to introduce such functionality across the country, beginning in locations such as San Francisco, New York and Boston in February before a broader launch in mid-2016.

Other banks getting involved with the technology include Wells Fargo, which expects to increase its number of NFC-enabled ATMs from 1,700 to 5,000 by the end of the year - meaning more than a third of its facilities will have such functionality.

Previous efforts for cardless ATM services have relied on QR codes, which need to be scanned with a bank's app, but increasingly, NFC is seen as the way forward. This technology works in much the same way as a mobile POS solution - users hold their phone close to the NFC sensor, then authenticate their identity either through a passcode on the phone or via the use of biometrics such as a fingerprint.

NFC at the ATM has already been in use for a couple of years, with the first such system implemented by ANZ in Australia in 2014. The solution, developed in partnership with NCR, allows owners of EMV-enabled contactless payment cards to simply tap their card to the ATM, rather than inserting it into the machine - a feature that helps reduce the risk of users falling victim to skimming.

The benefits of the technology

As well as meaning that consumers do not have to carry both their phone and their payment card with them whenever they need access to ATM services, one positive of cashless ATMs is that they are faster than traditional solutions. Banks using the technology estimate that it can reduce the time of a transaction from 30-40 seconds to around ten seconds. This might not sound like a lot, but it all adds up - particularly for ATMs in very busy locations. Another factor is the security benefits that cardless ATMs can provide. As users will still need to authenticate who they are with biometrics, they will not have to worry about a stolen phone being used to withdraw cash, while by taking the card out of the equation, the technology also sidesteps problems such as skimming or people spying on users' PIN entry.

While cardless ATM transactions aren't likely to replace payment card-based services any time soon, they do provide another, more convenient option - and this is something many consumers are now demanding.

JPMorgan Chase spokesman Michael Fusco told Wired earlier this year: "Our customer behavior is driving this as well. More of our customers are using online, mobile, and ATMs. We have 40 million digital users, and monthly ATM transactions are now outpacing teller transactions in the branches."

With the number of ATMs globally at a record high of 3 million installations and forecasts of future growth to 4 Million by 2020 (Retail Banking Research – Global ATM Market and Forecasts), the types of interactions and transactions that consumers do could very likely be about to change in the future as traditional self-service and emerging digital platforms begin to close converge.