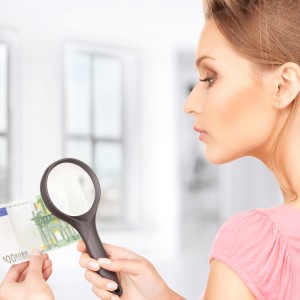 Keeping the quality of banknotes in circulation high is an important task for any financial institution handling cash. Poor-quality notes can cause a range of problems for banks, merchants and consumers, so need to be taken out of circulation quickly.

As we've noted recently, this is something that needs to be taken into account when banks are deploying cash recycling solutions, but unfit notes aren't the only issue that this technology should be looking out for. Worn or damaged notes are often harder to check in order to determine if they are genuine. Therefore, banks need to have solutions in place for spotting and withdrawing counterfeit notes at the earliest opportunity.

All banks should be aware of the problems that can be caused by counterfeit banknotes. Obviously, having fake notes in circulation can result in a reduction in the value of genuine currency and act as an inflationary pressure. In addition to this, counterfeiting can reduce confidence in cash and result in merchants being less keen to accept certain notes - as anyone who's tried to make a relatively small payment with a large-denomination note such as a £50 or $100 bill can attest.

Therefore, it's vital that banks be vigilant when it comes to spotting counterfeit notes as part of their cash recycling efforts. Banks are usually the first line of defence for this. First instance, the Bank of England notes that, while some counterfeit currency is turned in by retailers or members of the public, the vast majority is only discovered during sorting processes for recirculation.

The central bank stated that last year, some 243,000 notes with a face value of around £5 million were taken out of circulation, of which almost 70 per cent were £20 notes - indicating how forgers are focused on the highest-denomination notes that remain widely used and accepted.

It's vital that ATMs are able to quickly and accurately detect counterfeit bills upon deposit. Happily, this technology is becoming more widespread in both developed and developing countries.

Banks have a requirement to ensure that only bills that have been checked and confirmed as genuine are returned to circulation, so as cash recycling at the ATM becomes more common, counterfeit detection must play a central role in such deployments.