There’s no getting away from the fact that digital banking is on the rise and that it's changing business models for traditional financial services firms. But don’t believe all the hype - the branch is holding firm in the face of this tidal shift.

Despite the increase in online and mobile banking, there has only been a slight fall in bank branches in the US in recent years, according to a new report from the Federal Deposit Insurance Corporation (FDIC). 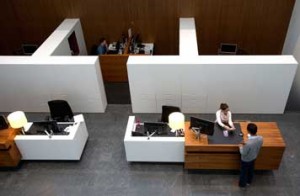 “Brick-and-mortar banking offices continue to be the primary means through which FDIC-insured institutions deliver financial services to their customers,” the body said.

“In terms of technological change, there is little evidence that the emergence of new electronic channels for delivering banking services has substantially diminished the need for traditional branch offices where banking relationships are built,” the FDIC added.

What it says is that rather than the decline in branches being a direct effect of digital banking, it’s probably more to do with the economy more generally.

Historically, the FDIC reports continues, net declines in branches have typically followed periods of financial distress, such as the Great Depression, the S&L and banking crisis of the 1980s, and the most recent financial crisis.

"Each of these crisis periods was characterized by weak earnings and bank failures, and many institutions were forced to make tough decisions about their use of physical assets," the FDIC notes.

The 1980s and 1990s witnessed a period of relaxation in branching laws that appears to have increased the number of branches by removing legislative constraints on how big networks could be and where they could be located.

The Riegle-Neal Interstate Banking and Branching Efficiency Act of 1994 sparked a boom in branch expansion that has only recently tailed off.

Mobile and online channels may be recent, but new electronic channels for delivering banking services, such as the ATM, have been introduced by banks for decades. Yet, the report shows how between 1970 and 2014 the total number of banking offices grew nearly twice as fast as the general population.

The FDIC National Survey of Unbanked and Underbanked Households, carried out just two years ago, showed that visiting a teller remains the most common way for American consumers to access their accounts.

To some, this comes as no surprise as the branch remains at the heart of everything that a bank is. Branch numbers may have been cut in recent years, but rather than an existential threat this should be seen as a cyclical trend of rationalizing a business to make it more efficient and more profitable.

Bank branches: a secret weapon in the digital war

Bank branches need to be better utilized as a key...

In India, branch transformation is being driven by new...