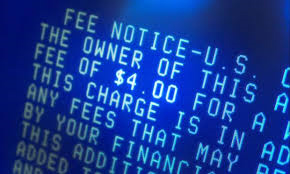 ATM fees in the US are at record highs, having risen by 20 percent in the last five years, according to a new survey showing consumers are paying more to use checking accounts.

Across America, fees are rising fast - the average fee for using an out-of-network ATM has climbed four percent to $4.52 per transaction, according to Bankrate.com. This breaks down to an average of $2.88 charged by the ATM owner to let non-customers use it, and $1.64 charged by the issuing bank.

So what is the purpose of these fees?

It’s true that ATM fees can be a useful revenue stream for banks. Figures from SNL Financial show the five largest US banks made $283 million in ATM fees in the second quarter of 2015. But could they also be damaging in the long run?

ATM fees can help deployment by making them cost-effective for the bank to install a machine in a particular location. However, bank customers want to be able to withdraw money without being charged to do so.

“Low upfront, transparent monthly fees are much clearer than those accounts that are advertised as free but have highly variable back-end fees like ATM fees and overdrafts,” he told Bankrate.com as part of the survey.

Fees are always a balancing act. But if issuers are imposing more upfront fees, ATM owners may need to consider their pricing strategy as the combination of high account fees and ATM fees could start to be a bigger consideration for consumers.

ATMs in the US: 46 years and counting