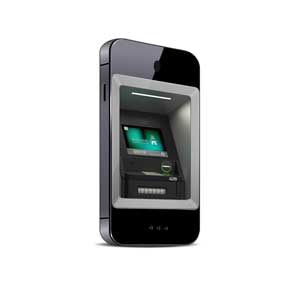 Mobile technology is transforming banking, not least in the way it affects how consumers engage and interact with the ATM channel.

What we hear slightly less about is how the functionality between mobile phones and ATMs is now enabling customers to withdraw cash using their smartphone, meaning they can leave their debit card in their wallet. These enhancements also allow people to customize the ATM experience, which is increasingly becoming similar to a smartphone or tablet in terms of usability and design – this is highlighted the most on the SelfServ 23 or SelfServ 27 from NCR.

There are a number of advantages for mobile-based cash withdrawal. Chief among these is the elimination of card skimming. While EMV chip cards will make counterfeiting of cards based on data stolen at the ATM, fraud is likely to then shift to the card-not-present environment.

It’s also quicker for the customer - pre-staging the transaction using a mobile can reduce the time spent at the ATM by more than 50 percent, according to the ATM and Mobile 101 report.

Customer loyalty is not something that most financial institutions would link with the ATM channel particularly, but there is evidence that customers will “appreciate having the ability to use a mobile device to personalize their ATM transaction menu,” explains the report.

In terms of wider mobile-ATM integration, customers can also enjoy benefits like an ATM locator app using GPS to point them to their nearest machine - including differentiating between free ones and those that charge.  This can also be customized to offer other services such as restaurants or shops.

There is also a big opportunity to tap into the unbanked market. As people without traditional checking or savings accounts increasingly rely on mobile money solutions, it makes sense that they could withdraw money from an ATM using their phone. This could translate into additional customers, as unbanked individuals start to interact with banks and decide to use their products.

Javelin Strategy & Research found that “mobile-first” US consumers (those who primarily conduct their banking through their phone) now number almost one in four (23 percent). On the other hand, those who use the ATM as their primary point of access represented one in ten consumers. Mobile-first does not mean mobile-only. Javelin’s report found they also engage actively in other channels, including the ATM. It makes sense to link these together - not only to keep the ATM as relevant as possible but also because it's just a better experience for all customers, whether they are mobile-first or ATM-first.

There seems to be no getting away from the fact that mobile and ATM integration is going to become increasingly important for the banking industry in the future. Those that make the most of it will succeed in satisfying their customers even more, while those that fail to fully embrace the trend could potentially lose out.

The ATM has many uses but above all it’s still a vital...