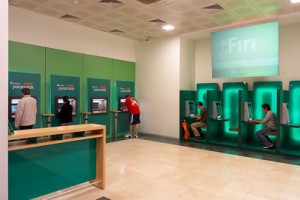 ATM Marketplace’s latest report, ATM Future Trends 2015, highlights how the capabilities of ATMs are being enhanced as providers add greater functionality than ever. One particular area of importance is mobile self-service integration, which is changing the way customers interact with branches.

Consumers want and expect to be able to do more at ATMs and this is increasingly driving the branch transformation process towards more of a self-service banking model. Although, the number one thing people wanted from their ATM is quite ordinary: they wanted to be able to withdraw cash in multiple denominations and not just $20 bills. While this seems like a simple demand, the survey shows what people really want is to be able to do far more.

Forty-four percent would like to be able to cash checks at an ATM, while 38 percent want real-time transactions; for example instant account credits from deposits. Also on the wish lists is emailing a receipt for their transactions and paying bills at ATMs. Even one in five consumers would like to set their own user-experience preferences (22 percent), while almost as many (19 percent) want the ability to carry out cardless cash withdrawals using their mobile app. These are some examples of innovation that we are already seeing in other parts of the consumer transaction world.

The report shows the different sort of transactions that different age groups want to be able to carry out. For younger people in particular, the physical attributes of the ATM are important - 30 per cent of 18 to 24-year-olds want prepaid card sales. One in five in this age bracket also want to purchase event tickets at the ATM. For those aged 55 to 64 the corresponding requests remain in the single figures.

The possibility of getting video assistance from branch operators at the ATM is spreading, with 37 percent saying that they would choose a video ATM rather than heading to a branch. This increased again with 45 percent of millennials saying they would prefer the video channel over a teller counter in branch.

They reported that the “ self-service model has been propelled by the development of advanced hardware — teller cash recyclers, video teller machines, cash recycling ATMs — and the sophisticated software that not only drives them, but also serves as link to tablet-equipped staff no longer tied to a teller desk and computer monitor.”

“FIs are seeing this new technology as a way to reduce the branch footprint, realize cost-efficiencies in staffing and operations, and redirect staff time from teller functions that create cost to sales functions that generate revenue and reinforce customer loyalty.”

Clearly, there is demand and expectation that ATMs should offer more services and consumers believe there are not enough machines that can do more than just dispense cash. This is an exciting time for reformatting the branch delivery model and it should be a time for considering, what else is possible?

With nine years in the financial technology sector, Shelagh comments on industry trends and innovation. Her vision is to empower financial institutions in achieving a seamless and personal customer experience across the Omnichannel.

Branch Transformation: An insider's view of the Interactive Teller

Editor's Note: Today's post comes at the courtesy of Terrina...