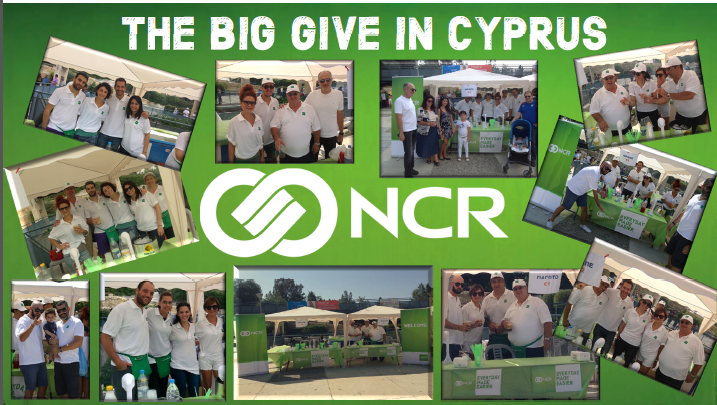 On Sunday September 22nd, NCR associates contributed with their labor towards the charity event “Together in Life” held by the Cyprus Association of Cancer Patients and Friends (PASYKAF Cyprus), aimed at raising money for the improvement of the lives of cancer patients and their families.

The activities took place between 10:00am-06:00pm at the Acropolis park in Nicosia, Cyprus and was visited by several thousand people who flocked the place with their kids, families and friends. They had a great time and a chance to eat “souvlaki,” drink amazing Nescafe Frappe (a Greek iced coffee adored by the general public in this part of the world), and taste a number of other local, mouthwatering delicacies. Also, the visitors had an opportunity to participate in a number of games organized specifically for kids and watch various performances by talented amateur dancers and musicians ranging from traditional Greek bouzouki tunes to modern rock ballads, tango, hip-hop, etc.… Unfortunately, the first September rains decided to make their appearance just a few hours before this great party was scheduled to end.

The idea behind the event was that all food and beverage stations would be manned by volunteers and all sales generated would go to charity. As soon as our remarkable A-Team heard about this charity “extravaganza”, they committed to the organizers that NCR staff would participate too. The A-Team is a group of “formidable” NCR associates whose goal is to bring the employees within the NCR head office in Cyprus closer together by organizing various bonding activities. So, after a careful assessment of our staff’s capabilities, the A-Team unanimously concluded that making and selling Nescafe Frappe at this fair would be a great catch. And, indeed it was!

Our 20 NCR volunteers were handed over a 20-square-meter station which they meticulously branded with our latest colors and logos – see attached photos. Our presence captured the attention of the camera lenses of various reporters who visited the fair and transmitted snapshots of our stall during the evening news on the local TV channels. But most importantly, this altruistic effort led by our A-Team raised $1,800 and contributed to an estimated total of 100 Big Give Volunteer hours by selling refreshing, NCR-made Nescafe Frappe. Starbucks, better watch out! This money collected was donated to PASYKAF Cyprus.

PASYKAF Cyprus was founded in 1986, in the divided capital of Cyprus, Nicosia, by a small but pioneering group of women. All of them had already experienced cancer in one way or another. Some were cancer patients themselves; others had suffered the loss of beloved ones. They knew what cancer was, and they were determined to fight it in every possible way.