The world is seeing rapid population growth and change. Just 200 years ago, the world population was less than 1 billion. It is now estimated at 7 billion and by the year 2050,  an estimated 9.6 billion people will inhabit the earth.

We are also seeing an expansion in the wealth of countries and consumers. Nearly every country has experienced positive sum gains since 1950. This wealth expansion is cascading to individuals as well. Global inequality increased from 1800 to 2000, but since 2000 this inequality has begun to decline and is being led by economic growth in developing nations. Extreme poverty has declined from over 40% in 1980 to less than 10% today. The global middle class is growing. In 2003, the global median income was $1,000 USD. By 2013 this doubled to $2,010 US dollars and it is projected to reach $4,000 US dollars by 2035. 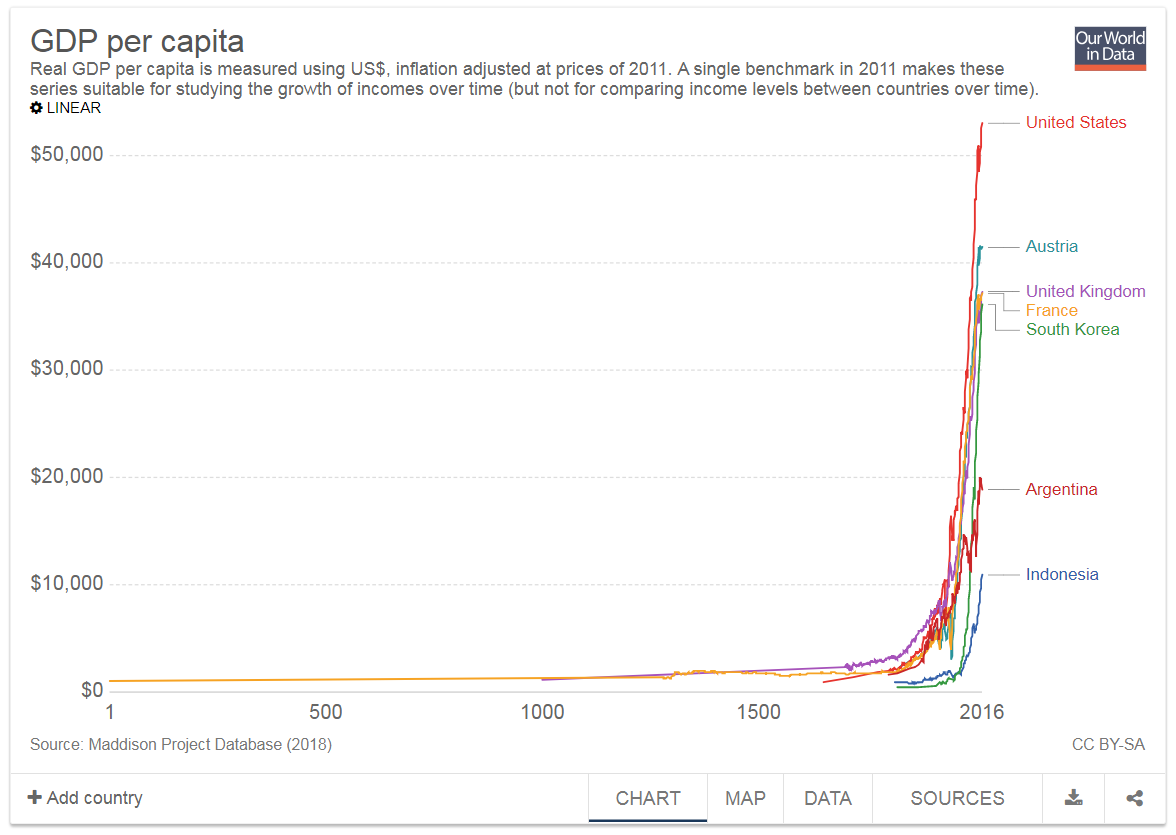 The quality of life has also improved. Microwaves were a luxury item 40 years ago. Televisions were a high-ticket item 30 years ago. These items are common today. Global adoption of smartphones reached 66% in 2015. Mobile devices accounted for 73% of Internet consumption. We have an expanded population, wealthier individuals, and a higher quality of life. This somewhat counterintuitive situation is possible thanks to the contribution of technology.

We have made it this far through improving the efficiency of our processes. Faster processors reduce the amount of time it takes to perform tasks. Improved data capture systems improve our accuracy. But we are reaching a limit to how fast we can make our processors, and the promise of big data is nothing without better decisions.

What is Artificial Intelligence?

Artificial intelligence is the next wave in unlocking value for businesses. AI allows computers to perform tasks that normally require human intelligence such as cognitive perception and decision making. It listens to these inputs, learns from the data and surrounding context, and drives better actions.

Traditional definitions of AI are often written by computer scientists and can be elite or inaccessible. I think there is an easier way to think about AI as it relates to your business. I believe all AI fundamentally performs three core functions.

AI helps us listen to the world around us and translate those inputs into usable data against which a computer can understand and act. It can evaluate messy data definitions across companies to extract key phrases, flavors, brands and more. It can use computer vision to identify people, speech recognition to translate the speech into text, natural language processing to translate text into context, and other cognitive methods for observing the physical world.

AI has the ability to take everything that it hears and it learns from the patterns it discovers. It interrogates information to identify patterns, while avoiding many of the cognitive biases that plague human behavior.

AI can help drive more powerful action. AI can be used to augment and even automate the actions of your business.

AI can already process more input signals than a human can at any time, and it can do this while avoiding the cognitive biases that plague human behavior. AI does this in a self-reinforcing loop. It listens, learns, and acts…and then listens and learns from the reactions. This is not to suggest AI is without mistakes, but AI is consistent. It can have a perfect understanding of a situation and will consistently act against that.

Why is AI relevant to my business?

How consumers expect to engage with companies is changing, and it’s being led by digital firms that embrace AI at the center of their business. Facebook, Alibaba, Google, Amazon, Weibo, and other digital firms are breaking ground in consumer interaction daily and are creating the standard for how consumers expect to interact with businesses. They’re doing this by delivering mass personalization powered by artificial intelligence.

These companies are not only setting the standard for consumer engagement, they’re using their captive audience to capture share in new industries. Companies ignore these trends at their peril, while smart operators will seek to mimic leading digital firms and find new ways to engage consumers and optimize their businesses with artificial intelligence.

According to IDC, the adoption of cognitive systems and AI will drive worldwide revenues from nearly $8 billion in 2016 to more than $47 billion in 2020. A Forrester survey found that business executives expected to spend 300 percent more on cognitive computing, as compared with 2016. Retail and hospitality industries have lagged other industries in their adoption of AI, but I think now is the right time for companies to adopt AI in their businesses.

We’ll continue to explore these trends in this blog with trends, leading examples, best practices and other stores on how artificial intelligence and data are shaping the future of commerce.

Rob Saker is the VP and General Manager of NCR’s Data & Analytics business. He joined NCR in 2017, bringing a 20 year track record of bending the curve on digital transformation on how companies embrace emerging digital and analytic capabilities. Saker leads NCRs strategy and direction of artificial intelligence and data monetization offerings. Since joining, he has driven the integration of artificial intelligence and advanced data capabilities into NCRs portfolio of hardware and software offerings. Previously, Rob Saker served as the Chief Data Officer at Crossmark, a leading retail services company, where he successfully transformed aged data capabilities that drove real-time collaboration with retailers and manufacturers and became a point of competitive differentiation. Prior to that, he served 8 years at MillerCoors, including leading the enterprise transformation of the firms data and analytic capabilities.